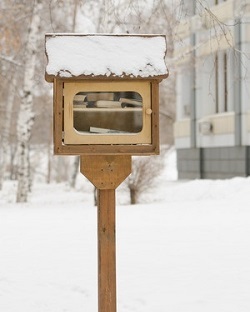 The phone booth library in the UK definitely qualifies as one of the smallest libraries out there.  Someone decided to take an unused phone booth (kids don’t even know what those are) and turn it into a functioning library.  Brilliant!

Another very small library is the the Corner Library in Williamsburg in Brooklyn, NY.  It was created by an artist, Colin McMullan, as an art project that works as a fully functional library.  It is essentially the size of a dog house, but has a door on the front and lots of shelves inside.

Anyone in the local area can access the library.  They just need to obtain a “library card” first from Colin.  The “card” consists of the code to unlock the library.  Once a person has become a member they can borrow any item from the library and share any items they want by putting them in the library for other members to borrow.  Of course the library is always open to members and you certainly don’t have to worry about it being closed due to budget cuts.  We think it’s a great idea.

The winner for world’s smallest library also happens to be one of the biggest libraries in the world.  The Little Free Library is a mailbox that is converted into a library.  The first one appeared outside the Hudson area along a bicycle trail.  Anyone can start one of these mailbox libraries and register them.  In 2015, there were estimated to be over 25,000 mailbox library “branches”.  Amazing!